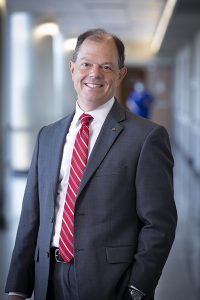 K. Scott Wester was appointed President and Chief Executive Officer of Memorial Healthcare System in May of 2022.  Prior to joining MHS, Wester served as President and CEO of Our Lady of the Lake Regional Medical Center in Baton Rouge from March 2008 where he oversaw the Baton Rouge market which included the 988-bed hospital, it’s freestanding Children’s Hospital, two free-standing Emergency Rooms, a network of 15 urgent care clinics, 540 employed providers, Franciscan Missionaries of Our Lady University (FranU), and multiple ambulatory locations that include both clinics and ancillary services. The Baton Rouge region is the largest of the markets within the thriving not-for-profit, integrated healthcare organization serving Louisiana and Mississippi. Wester was also responsible for the health system’s government and advocacy activities.

After joining the Franciscan Missionaries of Our Lady Health System nearly 30 years ago as an administrative resident, Wester has served in various operational and financial roles including President and CEO of St. Elizabeth Hospital in Gonzales and St. Francis Medical Center in Monroe, respectively. Throughout, Wester has focused on providing the resources and strategic guidance the teams under his leadership require to deliver the level of care and support patients and families need.